The end of March, first of April is an exciting time outside. Most movies exaggerate real life, but this time of year really is like that scene from Bambi. Happy, singing, smiling. Even the plants seem to be smiling.

While the Black Bear is emerging from her forest den, hopefully with adorable cubs, the Northern Spring Peeper is lighting up the wetlands and lake edges. These tiny frogs are a sure sign the cold weather has broke. Spring peepers are true hibernators. They have this amazing feature allowing them to survive freezing temperatures through the winter months. Glycerol is their “anti-freeze” which is produced in their tissues and coats their cells, thus protecting them from freezing. Also, peepers burrow in mud or under leaves to protect them from the elements and keep their skin looking good. When temperatures warm to above 40 degrees Fahrenheit, the frogs thaw and return to the land of those that begrudgingly made it through winter without sleeping the whole time. Around here, the time for emergence is early spring. In the southern reaches of their range (northern Georgia), they emerge as early as January. 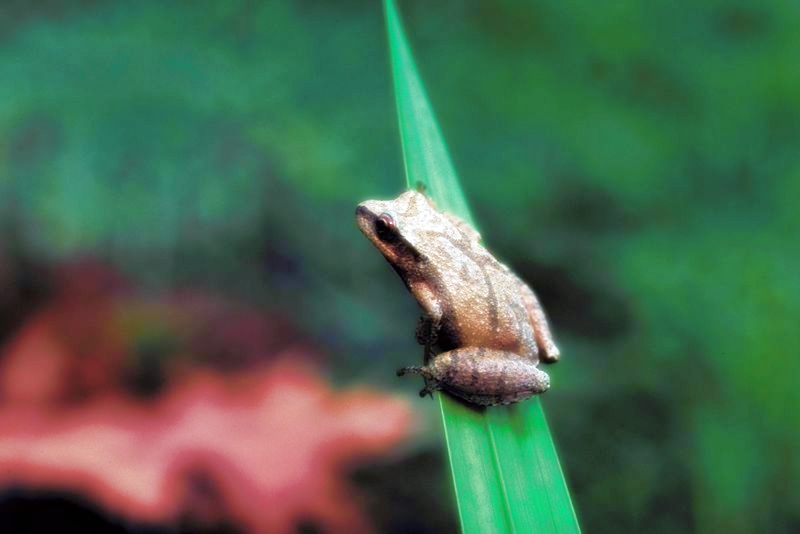 Similar to the Spring Song, peepers begin singing their happy song almost as soon as they thaw out. Only male spring peepers sing, or call since it seems birds have the monopoly on “sing,” and they do so to find a mate. The spring peeper call is a high-pitched, short note. They call from about April until the end of June. When many call together it is said they “may be mistaken for the sound of sleigh bells”…until you remember sleighs need at least foot of snow and this isn’t the 1800s. Growing up in this area the sound of spring peepers is quite unmistakable, maybe surprising when first heard in early spring, but a recognizable and welcome evening serenade.

I have never actually seen a spring peeper. I don’t have high hopes of ever seeing one either. First, they are only about 1 inch in length. Second, their coloring is a camouflage matching the dead leaves, bark, and muddy ground where they hang out. Third, they are nocturnal: sleep during the day, up all night, the opposite of my schedule. Your best bet to seeing them is now, though, while they are calling and congregating around ponds–until the end of June. Summer is the time when they’ve already mated, laid eggs, and go back to being solitary creatures.

Female spring peepers lay 700 to 1300 eggs in ponds or vernal pools (large puddles that show up every spring but dry up in the summer). Eggs are usually in clumps and attached to vegetation in the pond. Tad pols will hatch after about two weeks and become adults in anywhere between 45 and 90 days.  These adults will sing for their mates next spring.

One more note–spring peepers, scientific name Pseudacris crucifer, often have a dark X across their back and are sometimes called “the cross-bearer.” Nature is a funny thing. Happy Easter.

All programs and services are provided on a non-discriminatory basis.