The temperature fluctuation has been quite…interesting this year. While we have had a similar amount of snowfall and overall precipitation during the first two months of the year as compared to last year, we have definitely seen more snow this April. Last year the total amount of snowfall for April was 0.2 inches. This data was gathered at the MSU AgBio Research Station and can be found at NOAA. Sure we are all tired of the snow, but for our lakes and rivers the way we receive precipitation doesn’t matter quite so much.

Spring snowmelt is an especially important ecological event in the northern climates. The rush of water being added to rivers revives the stream flow, moves animals and minerals through the system; overall awakening rivers and streams from the low and slow water movement of winter. The graph below depicts information gathered from a USGS (Geological Survey are those last two letters) station–in Vogel Center! In a secret location on the Clam River there is a station gathering river data…it’s not actually secret. Coincidentally, we use this landmark as one of our stream monitoring locations. Why would we monitor in a location where there is a station gathering data with much more sophisticated equipment? Great question, because the info we gather is actually aquatic animals and their relation to water quality, not this kind of water data. Back to the graph– 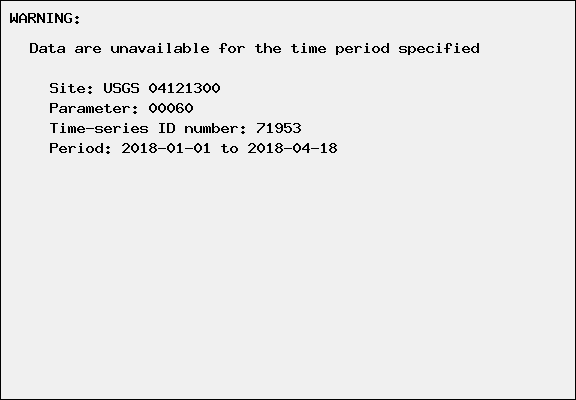 Notice the time between February 17 and March 3–the time the weather warmed up and the snow melted. The graph shows a drastic increase in the amount of “discharge” defined by USGS as: the volume of water that passes a given location within a given period of time.  I must say, the USGS site really helps the layman make sense of the data they present on their site. The information available to explore depends on the chosen site; data has been gathered for Clam River, Vogel Center since 1989. For the real environmental nerd, 4th grade science project, or numerous other people and projects, there is so much information to wade through and compare. This small snapshot of the February snowmelt is just to show what will be happening (hopefully this weekend) again. The surprise snow storm wasn’t ideal for us, but it will still benefit our rivers, lakes, and streams. What better way to celebrate Earth Day than to listen to the sweet sound of snow melting and rivers flowing?

All programs and services are provided on a non-discriminatory basis.